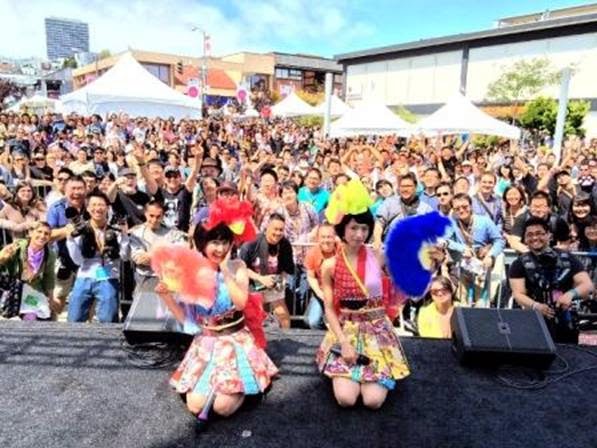 The 2014 J-POP SUMMIT also kicked off the second annual Japan Film Festival of San Francisco, which ran thru Sunday, July 27th at the NEW PEOPLE Cinema, located at 1746 Post St in Japantown.


The 2014 J-POP SUMMIT presented several top Japanese artists that made their U.S. debut including pop stars and Guests of Honor former AKB48 memeber, Tomomi Itano, May’n, Una and the teen idol group, Tokyo Girls’ Style, as well as crowd favorite Kimono Cosplay pop singing duo, Yanakiku, Japanese-American pop singer Kylee, and the return of human beat box phenomenon, DAICHI. Japanese actor and star of Itazura Na Kiss, Yûki Furukawa, also appeared in-person to introduce the U.S. theatrical debut of his new film at NEW PEOPLE Cinema, "wo ai ni” (I love you) in TOKYO, as well as directorMitsutoshi Tanaka who appeared for the premiere of his new historical biopic, Ask This of Rikyu.

In addition to Japantown appearances by all of these artists, fans were treated to some J-flavored punk and alternative music from the Akabane Vulgars on Strong Bypass and Pinky Doodle Poodle, who were notably introduced on-stage by Robby Takac of The Goo Goo Dolls.

Kawaii-themed fashion programming was presented in partnership with ASOBISYSTEM and gave attendees and fashionistas kinetic live appearances by iconic Harajuku models Misa Kimura, Akira, Una and Ayumi Seto, who launched her new, “Aymmy in the batty girls” apparel line. Fans also were introduced to the sexy pop color explosion of the girls of Black Diamond from Shibuya and an array of other on-stage dance and fashion contests and other programming such as Baby, the Stars Shine Bright Contest, an “ODOTTEMITA” Dance Contest, Cosplay Masquerade, J-POP IDOL Contest and the Japan Discovery Stage.

Kinokuniya Book Stores of America and SEGA® of America welcomed visual artist, KEI, who designed the character of Hatsune Miku, the world’s first virtual pop star, and made his first-ever U.S. appearance to meet Miku fans and sign his art books.

Web-based Japanese cultural channel and sponsor JAPANKURU, taken from an original coined word that implies, “Come to Japan,” showcased the country’s strong influence on pop culture with a colorful JAPANKURU x J-POP SUMMIT Festival 2014 booth that offered attendees unique products unavailable in the U.S. and insights into travel to various parts of Japan.

The POP GOURMET Food Festival also returned to J-POP SUMMIT for its second consecutive year and offered new expanded attractions that included a Sake Tasting area, produced by Consulate General of Japan in San Francisco and hosted by more than a dozen premiere sake brands and brewers, as well as RAMEN Street, and a Japanese Beverage and Bites & Snacks Area hosted in-part by Takara Sake USA, which brought the festival’s official cocktail “J POP,” as well as Sapporo USA, Azuma Foods, Meiji and ITO-EN.

RAMEN Street was a brand new attraction for J-POP SUMMIT this year and was co-presented in cooperation with the Ramen Yokocho Association. The scrumptious event drew tens of thousands who cued in hours-long lines throughout the entire weekend for a taste of authentic hearty, made-from-scratch Japanese ramen from some of the best purveyors of the dish in the world. Many of the local restaurants, merchants and other businesses in the Japantown area also benefited from the massive attendance.

“The record setting attendance for the 2014 J-POP SUMMIT affirms the tremendous popularity that Japanese pop culture has across a truly wide cross section of people of all ages, from all walks of life, and it is a direct result of the support of our sponsors, the City of San Francisco, the Japantown community, and the passion and hard work invested by our Festival staff as well as legions of dedicated volunteers that so generously contributed their time before, during as well as after this year’s event,” says Seiji Horibuchi, J-POP SUMMIT Festival founder and chairman of the J-POP SUMMIT Festival Committee. “Each J-POP SUMMIT strives to present a unique composite of the latest pop culture trends happening in Japan right now. Many of the artists and content that has been featured goes on to become globally popular. As we look forward to 2015, we reflect on lessons learned and also the energy that J-POP SUMMIT has brought to Japantown and the fun and excitement it has given to so many attendees year after year.”

About JAPAN FILM FESTIVAL OF SAN FRANCISCO
Launched in 2013, Japan Film Festival of San Francisco is the first and only fully-dedicated Japanese film event for the SF Bay Area, and features a colorful mix of narratives, anime and documentary film premieres and exclusive screenings with special guest appearances at the NEW PEOPLE Cinema in SF Japantown. Additional details are available at: www.jffsf.org.

About J-POP SUMMIT Festival
Launched in 2009, J-POP SUMMIT Festival is an annual street fair held in San Francisco, CA that celebrates Japanese popular culture. By introducing the latest in Japanese music, film, art, fashion, gaming, anime, food, as well as niche subcultures, the festival has become a prominent platform to showcase the latest pop trends and creative innovations from Japan.

In addition to the original Festival held in Japantown, new attractions include the J-POP LIVE AT UNION SQUARE concert in downtown San Francisco, the Bay Area’s premier dedicated Japan Film Festival of San Francisco, and sake-tasting and fine foods events at the POP GOURMET Food Festival, which have each further enriched the experience. Additional information about J-POP SUMMIT Festival is available at: J-POP.com.