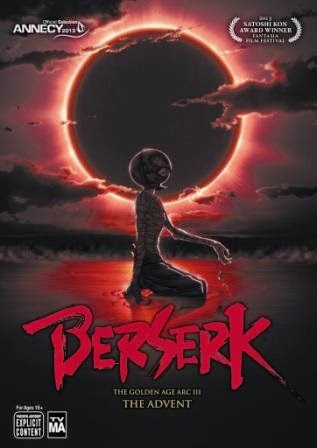 – VIZ Media, LLC (VIZ Media), the largest distributor and licensor of anime and manga in North America, delivers a special theatrical treat for attendees of the 2014 Japan Film Festival of San Francisco as it announces a screening of the visceral anime action feature – BERSERK: THE GOLDEN AGE ARC III - THE ADVENT – on Wednesday, July 23th at 7:00pm with an encore presentation on Sunday, July 27nd at 7:00pm. The film will be presented with the original Japanese dialogue and English subtitles.

The 2014 Japan Film Festival of San Francisco is presented in conjunction with the annual J-POP SUMMIT Festival and takes place July 19th–27th at the NEW PEOPLE Cinema, located in the heart of the city’s historic Japantown district, inside the NEW PEOPLE J-POP entertainment complex at 1746 Post St., San Francisco, CA 94115. Tickets for BERSERK: THE GOLDEN AGE ARC III – THE ADVENT are $13.00 each. Trailers and advance tickets are available now at: www.JFFSF.org.

BERSERK: THE GOLDEN AGE ARC III - THE ADVENT depicts the horrifying conclusion to the epic Golden Age trilogy and unfolds in a magnificently violent nightmare, signifying the birth of a new era. It’s been a year since Griffith’s imprisonment by the Kingdom of Midland. Once praised as the saviors of the Midland, the Band of the Hawk has been on the run and is on the brink of breaking apart. Much to everyone’s surprise, Guts returns to the Hawks, and the search for Griffith begins!

The acclaimed BERSERK manga series, by Kentarou Miura, debuted in Japan in 1989 and quickly drew a devoted following, going on to sell more than 30 million copies worldwide. The series, still ongoing in Japan, has been published in North America and the UK, as well as in France, Germany, Italy, Spain, Russia, and Latin America. The BERSERK manga has also inspired a popular anime television series and has spawned a variety of related video games, collectable figures and toys, and music soundtracks, as well as the current BERSERK: THE GOLDEN AGE ARC film trilogy.

For more information on the BERSERK: THE GOLDEN AGE ARC film trilogy, please visit the official Facebook page at: www.facebook.com/BerserkFilm.

About THE JAPAN FILM FESTIVAL OF SAN FRANCISCO
Launched in 2013, Japan Film Festival of San Francisco is the first and only fully-dedicated Japanese film event for the SF Bay Area, will feature a colorful mix of narratives, anime and documentary film premieres and exclusive screenings with special guest appearance at the NEW PEOPLE Cinema in SF Japantown from July 19 (Sat) through 27 (Sun), 2014. See additional details and ticket information at www.jffsf.org.