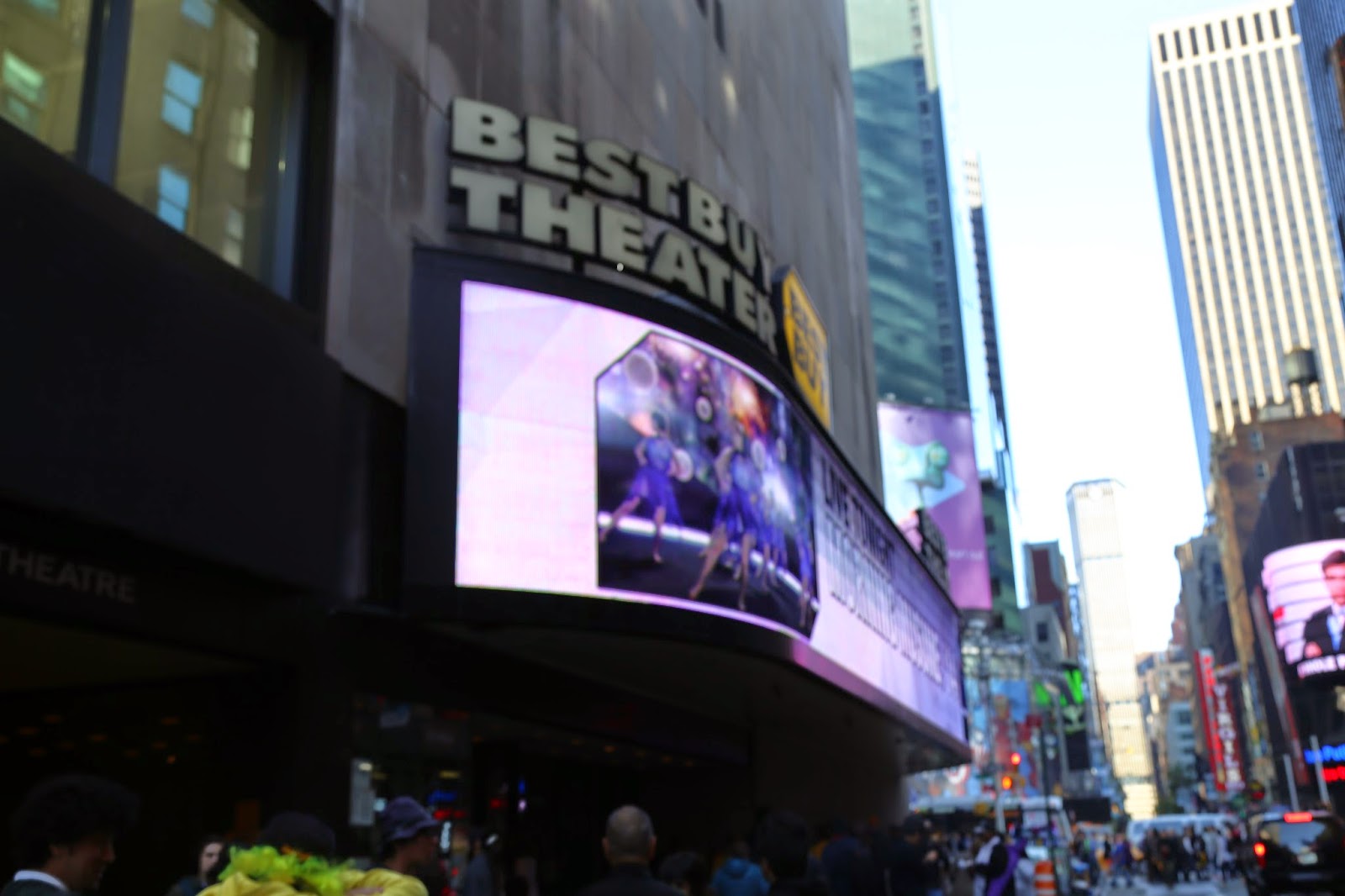 On October 5, 2014 Morning Musume ’14 had their second performance in the USA at The Best Buy Theater in New York City. The first time the group performed stateside was at Anime Expo in Los Angeles, CA back in 2009. Since Morning Musume ‘14 is an all-girl idol group that changes and adds members frequently, the members that performed recently in NYC were completely different from last time with the exception of one, current leader and soon to graduate member, Michishige Sayumi. Not only have the members changed, their musical style, appearance, and especially stage performance has clearly evolved throughout the years since their debut in 1997.

The 10 members (they recently added 4 more new members just days before the concert making their current count 14) came out in their red, black and white TIKI BUN outfits with leader Michishige Sayumi’s outfit modified to include the American flag patterned scarf attached to her right side. They started the concert with the members being introduced through a pre-recorded announcer in English, stating each members’ name and generation they are from one by one, (e.g. “From the 11th generation, Oda Sakura!...And now from the 9th generation, Riho Sayashi!”…) As expected from the members’ blogs and interviews in Japan about their upcoming New York concert, the girls studied, or better to say, memorized various English phrases to say to their fans here in the States. Oda Sakura, known to be one of the newest members, talented and very confident, was the first to greet the fans in English. After saying that she is happy to be in New York for the first time she added “I just want to have fun and let it go, let it go…” belting out the latter part to the melody of the popular Disney song, “Let it go” from the movie, “Frozen”. The rest of the members followed suit. Another notable introduction was Ikuta Erina when she said “I love Spiderman!” and shot out a web-like string from her hands into an unexpected fan. After the laughter, she stumbled to say in English, “A present for you!” The most disappointing introduction was their cute, yet infamously narcissistic current leader, Michishige Sayumi. Right before she began the crowd went crazy because Sayumi is about to graduate from the group in November after serving as a member since 2003. At first, she was honestly overwhelmed by everyone’s excitement but then got back into her narcissistic role and held both arms up in a goddess-like gesture, taking in all the praise, but only for a second (she’s not really THAT conceited after all, right?). She then greeted the audience with one sentence in English and just spoke in Japanese for the rest of her introduction. For anyone that’s familiar with Sayu-chan, that was no surprise. But fortunately, she makes up for that towards the end of the concert. The girls also asked the audience (in Japanese) if they understood Japanese language and most of them replied back that they did. The girls were so surprised. 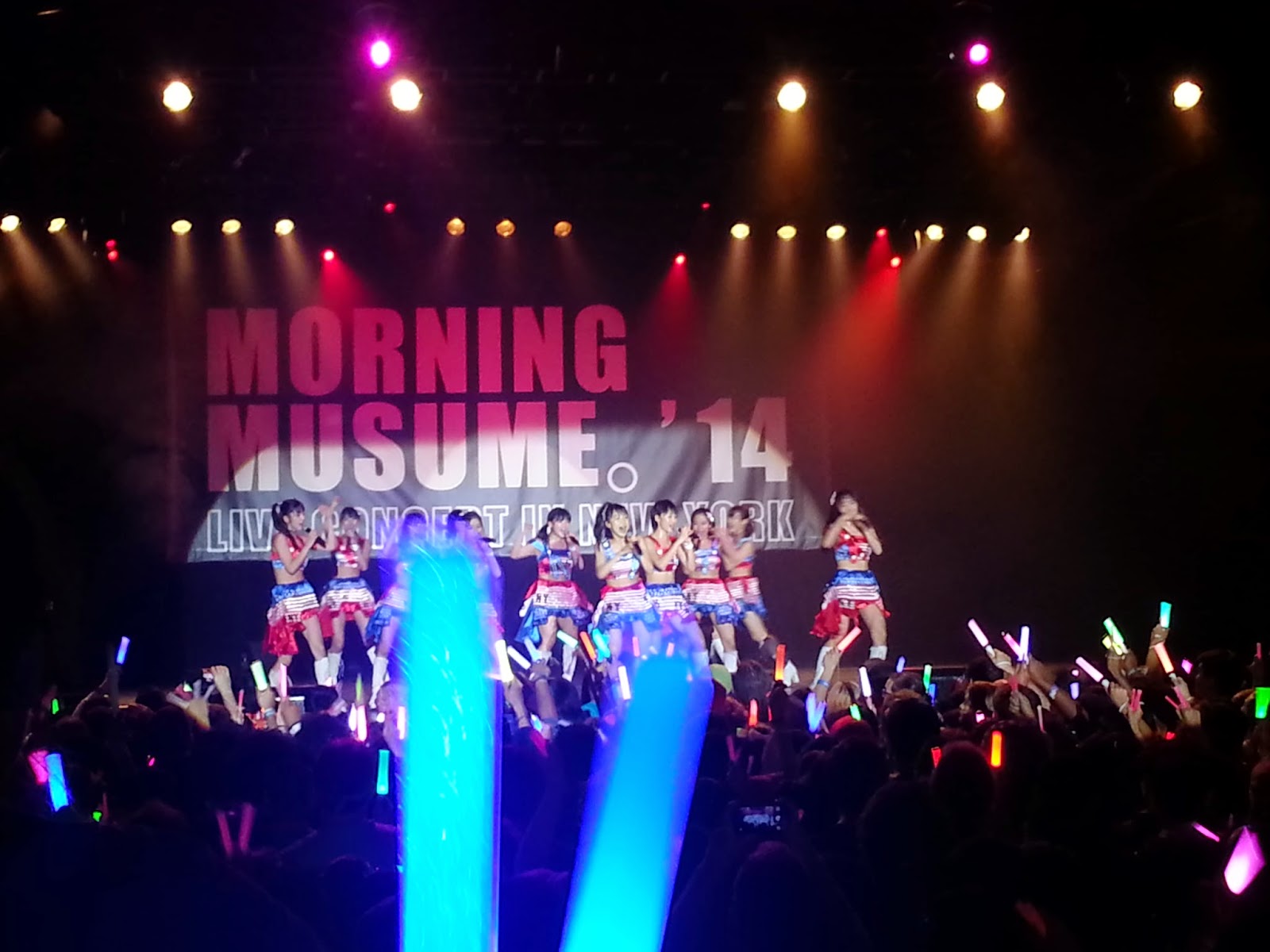 The first song of the concert was the popular “One-Two-Three” song that basically sets the tone for Morning Musume ’14 current style: techno-electronic dance pop with their current trademark: formation dance choreography. Even though there are moments in their songs where their voices are significantly altered by a robotic auto-tune, most of their songs are sung live while dancing energetically which is pretty impressive. Especially when you consider other large idol groups, like AKB48, who usually lip sync or other idol groups like Perfume who really have no choice but to lip sync because their music is entirely robotic auto-tuned. Also can’t forget to mention that their overall dance choreography has improved in quality, especially in upbeat songs like “TIKI BUN” or “Password is 0” and even in their latest pop ballad, “Toki wo Koe Sora wo Koe”.

But they certainly do not forget their Morning Musume roots as the pay homage to Morning Musume’s “Golden Era” , as dubbed by fans, by singing updated techno remixes of old hits such as “Love Machine”, “I Wish”, “Souda! We’re Alive” and “Renai Revolution”. While the girls performed the sweet chorus-like ballad, “I Wish”, lead singers like Sakura and Sayashi Riho truly shined vocally. Sayumi was missing because she was getting changed into her outfit for her solo song “Lalala no Pipipi”, which is a cute, hyper-electro pop song with Sayumi’s auto-tuned vocals being heard throughout the performance. During her performance, fans quickly replaced their light sticks with pink light sticks for Sayumi. Absolutely adorable performance, but kind of surprising to think that this super cute girl is 25 years old now.

After Sayumi’s solo song, the rest of the members came back to the stage in new colorful outfits to continue the trip down memory lane with “Shabondama” (Sayumi’s first song after joining Morning Musume) and “Kimagure Princess”. Around the time they performed “The Peace”, with a quick tug on their clothes their outfits turned into a two-piece skirt and top ensemble with the American flag pattern. Sayumi and another member had a clothing malfunction during the switch, causing Sayumi to run backstage to fix it only to return a couple seconds later. Their performance of these older songs not only shows the group’s progress but it shows how much the new Morning Musume ‘14 is versatile in style and talent, from singing their simpler pop songs from the past to the more advanced style of pop they perform today. 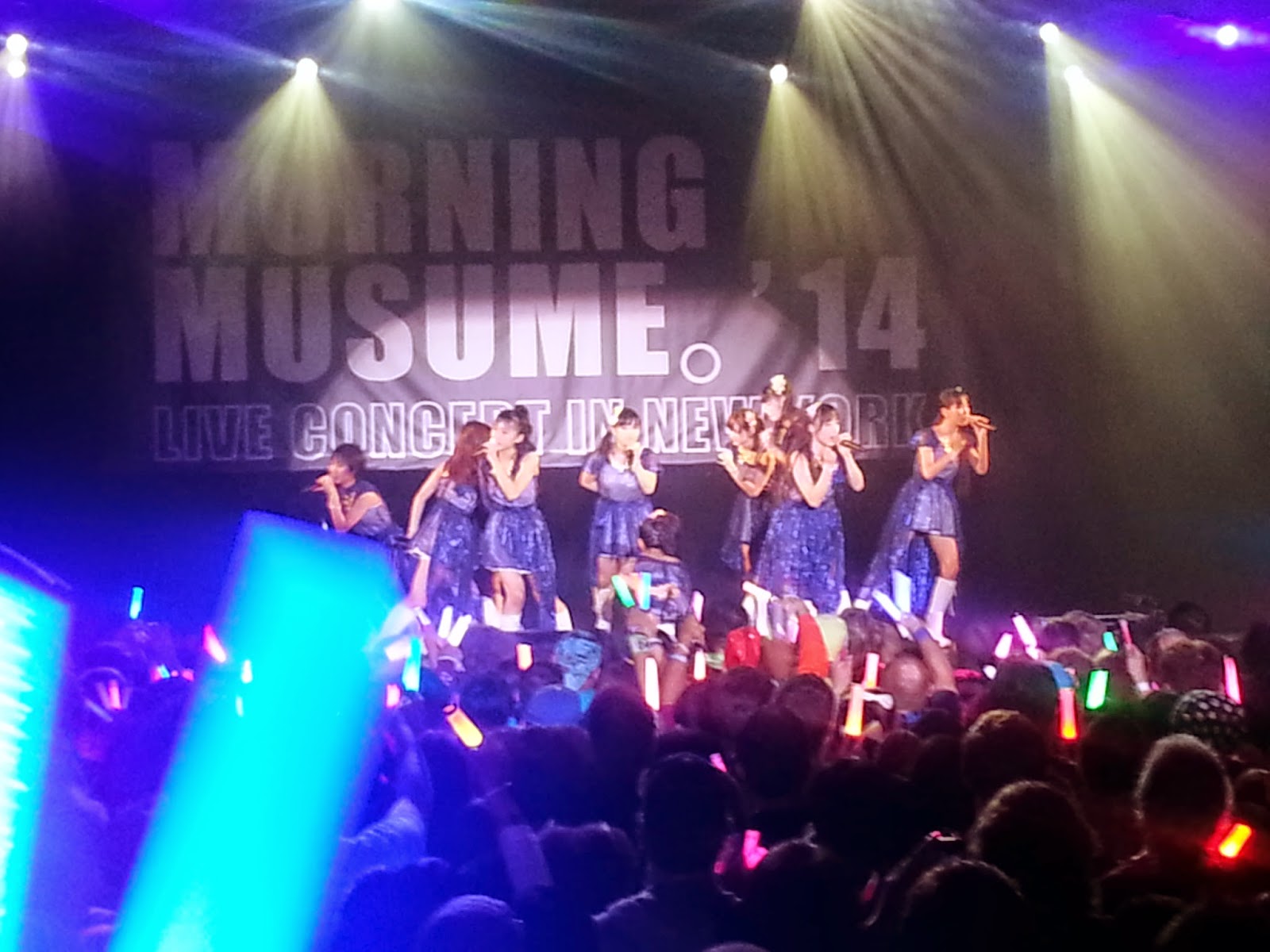 Towards the end of the concert, Sayumi surprises fans with a special letter she had written to them for this special concert. She said she would read the letter first in Japanese and then the translated English version. After reading the letter in Japanese, she took her time to read the English words very carefully, trying not to make mistakes and sounding as if she really meant every word. In the letter, she reminds everyone that she will graduate from Morning Musume ‘14 very soon. She also mentioned that performing in New York City will be one of her most favorite memories not only as a member of Morning Musume but one of the best memories of her entire life. As more people in the audience started to realize the meaning of the words she spoke in Japanese a moment ago more fans started to cheer and scream words like “Omedetou! (Congratulations!)” and “We love you!”. At those moments, Sayumi stopped reading and kindly replied “Thank you”, sounding genuinely moved.
They ended the concert with an encore performance that included their new pop ballad, “Toki wo Koe Sora wo Koe” and “Happy Daisakusen”, a typical sweet “thank-you-and-we-love-you” pop idol type song.
For fans that were lucky enough to purchase the limited VIP tickets or purchase their album with a ticket to the “Worldwide Handshaking Event” at the theater were able to meet the girls after the concert.

MJHR-JAPANESE ROCK RADIO Streaming 24/7.
Tune In by Computer or Cell Phone or Launch in Media Player From Anywhere in the World!
JROCK-ANIME ROCK-VISUAL KEI-JPOP-MAINSTREAM and MORE!!!