BACK-ON to Perform at Otakon Matsuri 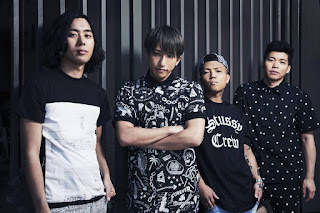 BACK-ON, a hybrid rock band blending a variety of music genres, will perform at this year's Matsuri, to be held before Otakon 2015. Combining KENJI03’s piercing vocal melodies with TEEDA’s mixture of English and Japanese rap, BACK-ON is a group of four childhood friends from Tokyo, Japan, that enjoys creating new rock sounds.
Since the start, BACK-ON has not only had concerts within Japan, but also overseas, including America, Germany, Canada, Europe, Brazil, Taiwan, and Mexico, receiving high acclaim for their refined and aggressive performance.

BACK-ON has previously released songs with GReeeeN under the collaborative band BAReeeeeeeeeeN. Individual BACK-ON members have also collaborated with other talented artists such as Koda Kumi and SoulJa. In addition, the band has composed songs for other artists and is well-known for their song composition.
Recently, the band has sung both theme songs of the anime series "Gundam Build Fighters,"spanning two seasons, as well as the theme song of its new sequel, "Gundam Build Fighters Try." To play such an important role in three consecutive "Gundam" series theme songs is a unusual accomplishment.
On October 5, 2014, BACK-ON performed a successful concert at the Akasaka BLITZ music venue. The band is currently on its Japan & World Tour 2015.
The band's main anime collaborations include: "Air Gear" (opening); "Eyeshield 21" (opening and ending); "Fairy Tail" (opening); "Gundam Build Fighters" (opening); "Gundam Build Fighters Try" (opening) and "One Piece" (opening composer). The band's main game collaborations include: "Tales of the World Mythology 2" (opening); "Tales of the World Mythology 3" (opening); Gundam G Generation Frontier" (opening); "Gundam Breaker" (theme song); "Gundam Breaker 2" (theme
The Otakon Matsuri is an outdoor street festival that will be held from 12:30 p.m. to 9 p.m.on Thursday, July 23 at Baltimore's beautiful West Shore Park at the Inner Harbor. Admission is
free to both the Otakorp membership as well as to the general public. The event features many attractions to keep attendees well-occupied: games, contests, prizes, live entertainment, great
food, and even Otakon guests, who have been known to stop by and take part in the festivities.Otakon 2015 will be held July 24-26 at the Baltimore Convention Center in Baltimore, MD. Otakon
2015 is celebrating fairy tales, folk stories, myths, and legends. Keep your eyes out for content, artwork, and guests with connections to our theme.
Email ThisBlogThis!Share to TwitterShare to FacebookShare to Pinterest
Newer Post Older Post Home