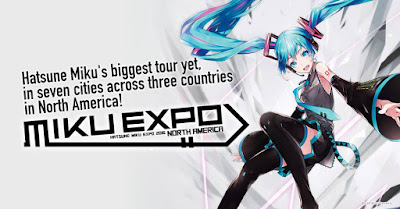 MIKU EXPO 2016 North America-The Japanese Virtual Reality Pop Star Hatsune Miku Returns to North America this Spring and Tickets are on sale now! http://www.axs.com/search?q=hatsune+miku
Opening for Lady Gaga last year gave concert goers not familiar with Hatsune got to see an amazing performance and was awesome promotion for Japan in general. Although a singing voice synthesizer and a hologram she has over 100,000 songs to her name, a number one album in Japan and was even a guest on New York's famed David Letterman's Late Show.