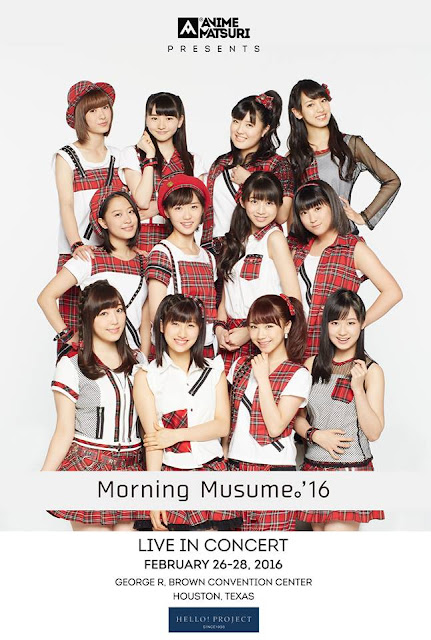 
*Access to the concert is included in your convention badge. There is no separate ticket for the concert. Superpass holders get early access to Concert Arena.

In 1997, an audition was held to find a female vocalist for the rock band “Sharam Q” on the Japanese TV show “Asayan”. On September 14th, the five finalists from the audition led to the creation of Morning Musume。


In order to begin their major debut, the five finalists were challenged with a very hard task: sell 50,000 copies of their Indies single “Ai no Tane”. They succeeded in just five days leading to their first major single, “Morning Coffee” in 1998. Their 3rd single, “Daite HOLD ON ME!” ranked 1st place in the Single Weekly Ranking Sales.

Following this, the group received many awards, such as, the Best New Artist of The Year Award with “Daite HOLD ON ME!” during the 40th Japan Record Award and participated at the famous 49th “Kouhaku Uta Gassen” hosted by the national Japanese TV “NHK”.

Since their debut, members have been selected through an audition process and left through a graduation ceremony.

On September 1999, their 7th single, “LOVE Machine” sold over a million copies. Other hits include “Koi no Dance Site”, “Happy Summer Wedding” and “Renai Revolution 21”.
Through their continued success, the have performed in many international concerts. They began touring Asia (China, Taiwan and South Korea) and subsequently, in 2009, Morning Musume。 participated at “Anime Expo” in front of 7000 people. In 2010, they also performed at “Japan Expo” in front of 4000 people.

Since their debut, Morning Musume。 has continued enjoyed continued success, releasing many singles and albums that consistently top CD sales and participated in dozens of nationwide tours. The group also participates every year in hundreds of events including the Hello! Project tours.

The group Morning Musume。’16 is composed of 12 girls (26 girls have previously graduated). They have released 60 singles as well as 14 original albums and celebrated their 18th anniversary! One of their songs, “Kimi no Kawari wa Iyashinai”, released on 29th January 2014, was the official support song for Japanese athletes at the 2014 Winter Olympics in Sochi and the song “What is LOVE?” was the ending theme for the TV show “J-MELO” of the TV channel “NHK WORLD”. The song “Password is 0” was the theme song of a Japanese mobile company’s CM broadcasted on the Japanese TV channels.

Morning Musume。’16 is part of a project idols group called “Hello! Project” along with ℃-ute, ANGERME, Juice=Juice, Country Girls, Kobushi Factory and Tsubaki Factory. While the group performs in huge sold out concert halls, all the members also take part in many musicals, plays, TV & radio shows, etc. With such a history, Morning Musume。’16 can only continue their successful career! Recently, they performed on the October 5th 2015 in New York at the Best Buy Theater on Broadway. Their 60th single includes an English lyrical song “One and Only” that they will perform in Houston, during the convention “Anime Matsuri” on the end of February 2016.

Are you ready to see the best performance and dance group from Japan?
Email ThisBlogThis!Share to TwitterShare to FacebookShare to Pinterest
Newer Post Older Post Home