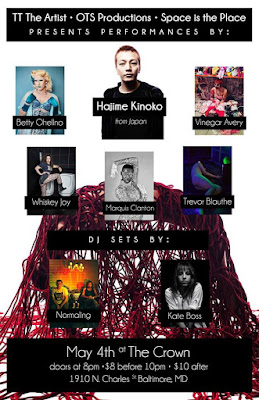 TT The Artist / OTS Productions / Space is the Place present:

His activities focus on installations using ropes, photographic works, and show performance.
Nature, mother Earth, creativity, heart and mind, mother, friends, the things we like, and then our DNA memory.

All the things around us are interconnected and interrelated.

Our instincts and inner memories resuscitate by means of a single thread, as they bloom through the fate of one single red rope.

Domiciled in “Shibatta-city” (which when pronounced in Japanese also means “tied”), 4-6 Shibatta, in the “Minami” district of Nagoya, he attended the “Aoi-nawa” (which in Japanese also means “blue rope”) kindergarten, and graduated from the Tokai municipal “Nawa” (“rope”) elementary school. His obvious destiny was extensively connected to ropes from an early age and were some of the very first confirmations inviting him to become the worldwide renowned rope specialist he is today.
Featured on Vice Japan and Anthony Bourdain

His performance at the Crown will be Cyber Rope, Futuristic bondage “cyber rope” is produced using fluorescent ropes and glowing illuminations. Kinoko carries the beauty of Japanese bondage into our modern era and perpetuates classical “Japanese bondage” through two traditional pillars.

Marquis Clanton
Since 1999 Clanton has walked in balls, the events where vogue contests are held, wowing judges, winning fans, and making a name for himself as Marquis Revlon. Clanton has performed up and down the East Coast and out in Los Angeles and Chicago, collaborated with French photographer Frédéric Nauczyciel, whose most recent series of portraits of Baltimore vogue performers went viral after gallery exhibitions in Paris and New York.

Whiskey Joy
From Baltimore, Maryland, burlesque performer Whiskey Joy takes a little nip and does a little strip! Managing Director of TimelessTease Productions, Whiskey has performed and kittened up and down the East coast. Straight up or on the rocks, feel the warming tingle radiate through you as Whiskey Joy pours herself over your senses.

Vinegar Avery
Wolves holding tea parties in the forest that end in Bacchanalian orgies (“Could I warm up your cup of lamb’s blood?”) Filthy children dressed in silk and cashmere snipping thread to the rhythm of vile, throbbing machines (they, of course are fed on nothing but treacle and dirt cake) Sacred dance rituals actually performed by the gold foiled bone exposed relics (held in place with jewel-toned thread, scraps of trash and bubble gum) Velvet salon conversations by rotting pieces of wood with monocles and spats (“I say old chap that witches butter fungus on your clavicle is delightful”!) Perfectly preserved little corpses draped in finery being dragged around in a mahogany slay for endless photography sessions( no thank you, no anesthetics, smile pretty!)
Perhaps more than anything else I am interested in empathy. I like to feel haptically, corporeally and emotionally. I have found the experiences of opposites aids this experience.
Absurdities, contradictions, opposites, amuse and frighten me-things whimsical and macabre/ glamorous and rotten/ strong and vulnerable / natural and artificial/ grotesque and ordinary/ erotic and innocent: strict Victorian decorum and ferocious punk rock dances. Cats are an active force in my mythology while dolls are a passive one.
I like things in the uncanny realm of attraction and repulsion. I also like to laugh and play. I like the physicality of repetition.
Much of my work takes on the aspects of childhood and fairy tale through the lenses of a cherished nightmare and personal identity. I am fond of coloring books, playing dress-up, magical animals and -most importantly - dolls. However I am often seduced by research of traditionally feminine domestic practices from bobbin lace weaving to spinning fibers to preparing desserts.
My work is a very personal response to the problematic erotics of a female aesthetic, and thus both a celebration and condemnation of socially constructed performances of gender and femininity.
certainly more than anything else I am interested in empathy.

Trevor blauthe
is a performance artist hailing from Baltimore md that utilizes sculpture, video, and sound to create discordant scenes of love,loss, and desolation. The audience takes on the role of the voyuer as they gaze into his perversions of yearning and isolation, manipulating their perceptions of the present and distancing himself as an outsider. Be prepared to feel like the peeping tom or the twisted bystander, all you can do is watch and wait.

DJ performance by:
Normaling
.rar Kelly and Lemz, expands the palette of Baltimore club with techno, electro, hip-hop, ballroom and other underground sounds for an even more raucous approach to club music.

Kate Boss
Kate Boss started DJing to rock parties—not to be an it girl whining about how the boys get all the opportunities. As a partner at Space is the Place Records, Kate works to push deserving artists into the limelight, edging out its current crowd of practiced egoism and carbon copied styles. Behind the decks, Kate’s sets vacillate between sexy and tough—two words that best describe her no matter what she’s doing. She isn’t interested in your exclusive collectives. She wants no part of your babysitter club. She is not your girl. She’s here for the music and the party. That’s DJing. The rest is just noise.