TOKYO’S OTONANA TRIO RETURN
FOR SOUTHERN U.S.
​TOUR ​
The 'Somebody Buy To Me A Beer Tour'
Celebrates Local Brews Shared With Fans 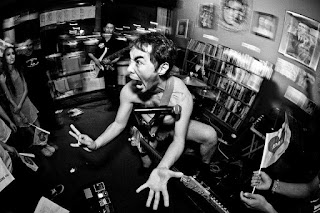 Otonana Trio return for a tour of the southern U.S. June 10 - 18, 2016. The Tokyo band tours the States several times a year, winning fans with a hilarious stage show and tight musicianship. The "Somebody To Buy Me A Beer Tour" is named after their song by the same name, from their latest album  "The Lost Ramen Generation" (October 2015). "Like the many kinds of Ramen in Japan, there so many different beers in the United States." says founder-singer-guitarist Kentaro Saito.

"Ramen shops have the personality of its chefs in Japan, same as the local craft beers we taste in U.S. We look forward to trying new beers with new friends!"

Kentaro formed Otonana Trio after graduating with honors from the Musicians Institute in Los Angeles and New School in New York, and playing in different bands in both Japan and the U.S. He tapped Kazuhisa Maekawa, “the best bassist in Japan” to join him, and Kaz brought on longtime friend Hikari Kuroda as their drummer. Their mind-blowing rhythm section supports Kentaro’s ace playing and one-of-a-kind showmanship, which includes layers of costume changes and inciting audiences to chant, dance, practice their Japanese, and wave flags in support of the ‘Ramen War’.

“We’ve written our songs to be played in concert. Otonana Trio want to bring the best live performances for our friends in the States! The good reactions are why we play!" says Kentaro.

Known for their celebration of Ramen noodles, the band will be selling packs Ramen from Japan, along with comic books illustrated by Kentaro.


Otonana Trio's new video "Somebody To Buy Me A Beer" is a wild collage of tour photos and an homage to beer: